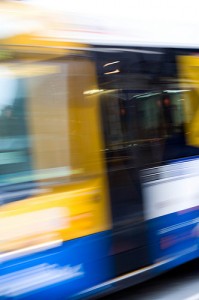 It’s not something I often do but Friday just gone I caught a Brisbane City Council bus to the city.  It was the 411 running fromt the University of Queensland and as I hopped on the half full bus I noticed it was predominantly populated with young students.

The bus was clean, it seemd relativel new, and the ride was smooth – almost peaceful as we cruised over the hill on Swann Road.  But it wasn;t the smooth ride and clean unholstery that delightffully surprised.

At the first stop a young student popped off and jumping out the rear door yelled a thank you to the driver.  Then again at the next stop the same was repeated.

All the way into the city as the passengers disembarked the audible thank yous echoed cheerfully down the aisle to the bus driver.

In the current Australian climate of fear and suspicion, especially with the G20 looming large it was truly a delight to see some basic human kindness in action.  I’m not sure if this is everyone’s experience of riding the 411 but if it is maybe there are a few others out there who could catch a bus occasionaly just to be reminded and delighted that we human beings can be capable of just that little bit more than suspicion, fear and hate.